Both Cambridge Liberal candidates holding off on celebrations

Cambridge riding's Brian May and Kitchener-South Hespeler's Valerie Bradford, both leading, are waiting until mail-in ballots are counted
Sep 21, 2021 3:24 PM By: Doug Coxson
Previous Next
1 / 1 Bryan May, flanked by his wife Kristin, thanks his campaign team during a preliminary victory celebration at Piatto on Hespeler Road early Tuesday morning.Doug Coxson/CambridgeToday.ca
Expand
Previous Next
Listen to this article
00:09:24

“I would love to stand up here and say we did it and we’re done, but we’re going to be in the wee hours of the morning before we get a clear picture of how we did,” Cambridge Liberal incumbent Bryan May told a room full of supporters early Tuesday following a tense election night that kept poll watchers guessing the outcome in both local ridings.

As of Tuesday at noon, neither May, nor leading Kitchener South-Hespeler Liberal candidate Valerie Bradford were ready to claim their seats as mail-in ballots were still being counted.

With all but one poll reporting, Bradford was less than 700 votes ahead of Conservative candidate Tyler Calver with 3,631 mail-in ballots still to be tallied.

"Justin Trudeau will be the prime minister tomorrow, but we’re going to have to wait and see if I get to join him," May said around 1 a.m.

May arrived at his victory party shortly after midnight to the cheers of supporters, but wasn’t quite ready to claim the win with only an 1,100 vote lead over Conservative candidate Connie Cody and more than five polls still to be tallied.

But by 2:30 a.m. and only two polls left to report, May’s anticipated victory was much clearer but still undecided with only a 1,600 vote spread.

Of the 2,961 mail-in ballots issued in the riding, 2,417 had been returned by election day and were being counted.

Some pollsters, including the Canadian Press, called May the winner regardless of the final number, confirming the Cambridge MP has been handed his third mandate with 37.6 per cent of the votes at 19,783.

During his address to supporters this morning, May touched on Liberal leader Justin Trudeau's visit to Cambridge, which was marred by anti-vaccination protesters shouting obscenities and threats.

On the campaign trail, anger about vaccine mandates from a vocal minority was mixed with frustration about the election call itself.

With the Liberals gaining only one seat in a return to a minority government, and the estimated cost of the election topping $600 million, many said the election was unnecessary, a waste and even dangerous to call during the fourth wave of a global pandemic.

But May joins his fellow Liberals in disagreeing with the opposition party leaders.

“We know that in 2019, nobody had heard of COVID. All of the stuff we’ve done in the last year and a half, the people of Cambridge, people of Canada did not have a say in what we did in response to COVID,” he said.

“This election was about two things; do you think we did a good job, and do you agree with what we want to move forward in recovery?”

From his perspective, calling an election at this “pivotal moment” as we shift into recovery “was absolutely necessary."

“I get people are tired. They’re frustrated. They want this to be done. And I’m sure the last thing they wanted to worry about was an election. But we need a mandate and we have a mandate now based on COVID and we can move forward,” he said.

May highlighted the Liberal plan for $10-a-day childcare, a focus on economic recovery, transition to a green economy, and reconciliation with First Nations.

“My greatest fear in this election was losing to a Conservative government and seeing what happened in 2006 with the cancelling of the Kelowna Accord happening all over again and setting us back even further with First Nations.”

That agreement was around a five-year $5 billion plan to improve the lives of First Nations, Metis and Inuit people.

Moving forward on a similar plan has been one of his biggest priorities this election, May said.

The need to tackle climate change was another top priority on this campaign, he said.

The MP told many people at the door that he doesn’t believe the Conservatives will govern again “until they get their heads wrapped around climate change.”

“Until they can figure out that it’s real and needs actual tangible solutions and not just lip service, the people of Canada will not put them forward to govern,” he said.

In comparison to the targets set out by the Liberals, all of the Conservative platforms on the environment over the last decade were “shallow” to say the least, he said.

It has been particular concern for May and his family, he said. “When you have kids. Things change.”

He wants to make sure they and all future generations inherit a planet that is sustainable, with the understanding that it’s "not only the right thing to do, but the smart thing to do in terms of the economy."

The Liberals plan to tackle both with a national housing strategy; 10 year program that started in 2017 and "the best platform to try and get a handle on affordable housing."

May said with the average price of a house in Cambridge topping $800,000, he knows it's not sustainable.

"We need to make sure those platform planks are implemented immediately."

In terms of local concerns around poverty, homelessness and opioid addiction, May said the Liberal government plans to continue bolstering support programs in all three areas through transfer payments to the provinces.

May said one of the first things the Liberal government did in 2015 was put $150 million toward dealing with the opioid crisis, steering doctors away from prescribing opioids just as the weight of the problem was hitting Ontario.

“We know that this is still a major problem. We know we need to continue to support the CBSA (Canada Border Services Agency) to stopping these drugs from coming into Canada. We need to make sure that communities and non-profit organizations have all the resources they need to deal with this issue and support these people.”

Referring to the upcoming discussions the city will have around the location of a consumption and treatment services site, May said any conversation he has in relation to the issue always has to start from a place of saving lives and harm reduction.

“If we’re not coming at this from a health issue perspective and trying to help save lives and respecting that these people have value, it’s a non-starter,” he said. 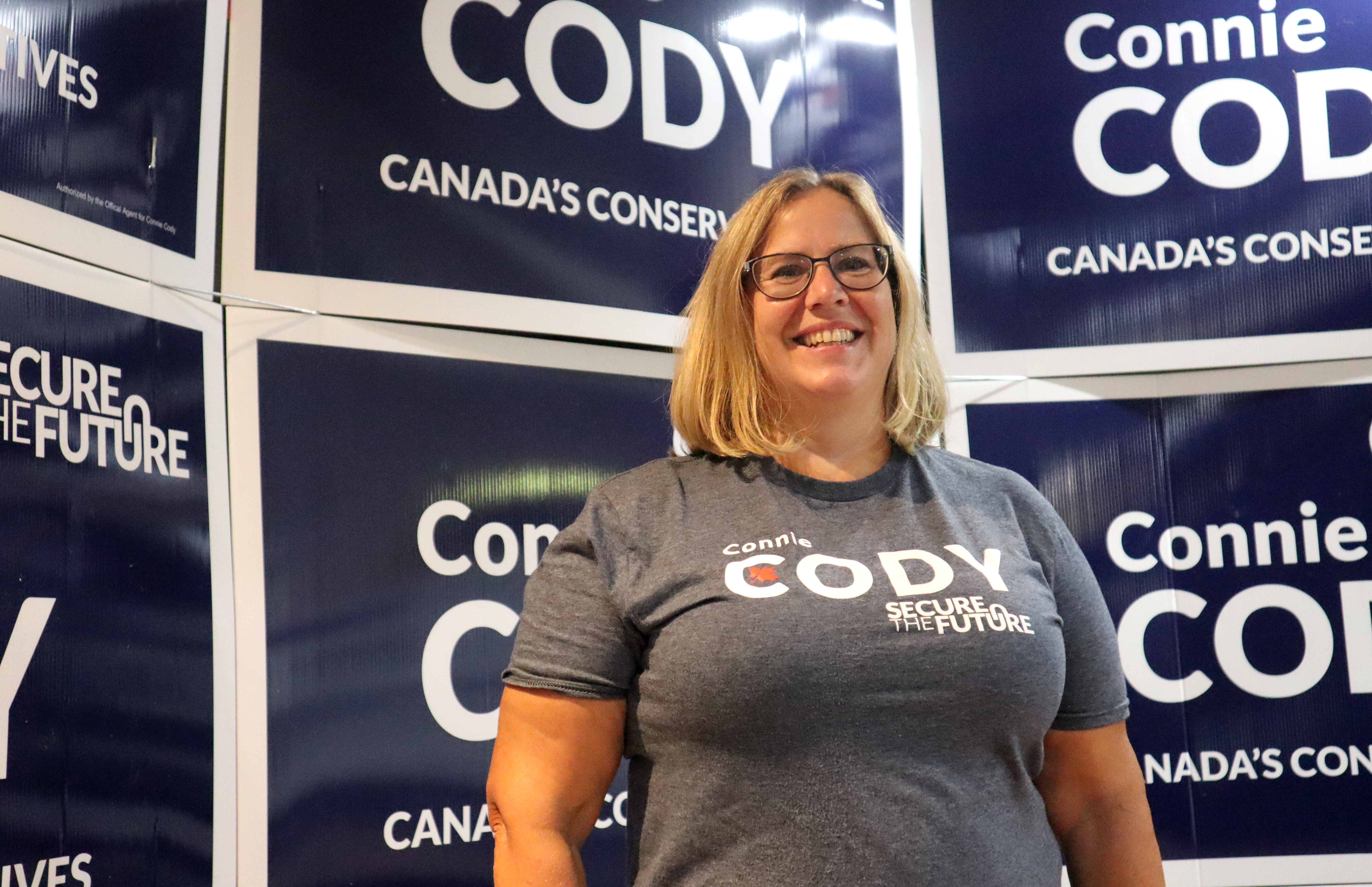 Earlier in the evening, with only a few polls reporting, runner up Connie Cody was at her Water Street campaign office with her team of supporters.

Ready to celebrate their efforts at the close of the campaign, the one-time municipal candidate for Ward 7 said the issues she was hearing at the door this time around were completely different.

“Some people weren’t even aware there was an election. A lot of people were upset that an election was being announced so there was a lot of anger toward that,” she said. “Many thought the money would be better spent elsewhere in the communities.”

Cody said the election was called at the wrong time and she agrees with some in her party who believe holding the Liberals to a minority government represents a win for the Conservatives, not only by proving the election was unnecessary, but by ensuring Canadians of all political stripes continue to be fairly represented in Parliamentary debates.

“At least there’s fair opposition so there’s more of a healthy debate between parties,” she said.

Affordability, homelessness and jobs were top concerns of Cambridge voters, she said.

“A lot of younger generations are really scared of the future. A lot of business owners are suffering because they can’t find employees.”

Some criticism was raised against local Conservative candidates for being elusive during the campaign, not responding to media requests, or ignoring invitations to attend organized debates.

To that, Cody said she participated in two debates, one for the Cambridge Chamber of Commerce and one for the University of Waterloo, and responded to questions from the CBC.

Instead of spending time preparing for debates, she added, she decided her time would be better spent hearing concerns directly from Cambridge voters.

“With such a snap election, being only 36 days, we decided our focus would be door to door,” she said. “We decided to put people before politics, so I wanted to make sure I heard from the people and answer their questions.”

That open-door policy would have extended to her constituency office had she been elected, she said.